"When I became responsible for teaching others ... through drawing ... I really had to understand the science and learned a great deal from the process." — Mariana Shnayderman, MIT student, 2003

The Picturing to Learn program was founded on the following core premises:

Picturing to Learn was funded by the National Science Foundation, DUE from 2007-2010. The project involved science students and faculty from Harvard, MIT, Duke University and Roxbury Community College, along with design students and faculty from the School of Visual Arts, New York. Students were asked to "Create a freehand drawing to explain to a high school senior…" various scientific phenomena.

The idea began with Principal Investigator Felice Frankel's experiences while working with scientists to visually express their research. It was clear that when the researcher created drawings to explain to her the phenomena, the process itself seemed to clarify the science in the mind of the researcher. Frankel approached a team of educators and cognitive scientists with the idea of using this in the classroom and all agreed this would be an innovative approach for teaching and learning.

The primary finding of the program was that the process was a powerful means of revealing student misconceptions. A database of 3,000 analyzed drawings from various undergraduate science courses is available here:

"I was able to teach the material far better after seeing the students' drawings…They revealed misconceptions in a way that text does not… it became obvious when they didn't have a clue. As a whole, the class did far better on exams in 2005 than they did in 2004. We attribute that, in part, to Picturing to Learn." — Donald R. Sadoway, John F. Elliott Professor of Materials Science, MIT

Plans are under way to bring the program into middle and high schools. 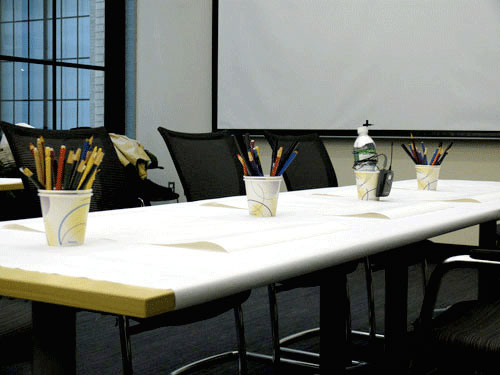 Workshop I, Winter 2007
Which compound has the higher boiling point?
4 design students from New York’s School of Visual Arts (SVA) and 3 MIT students gathered as a group to collaborate on this particular question and discuss selected published science illustrations.

Workshop II, Spring 2008
Why is the sky blue?
4 design students from SVA and 4 Harvard students gathered as a group and then in pairs to visually express this answer to this question and discuss the limitations of a textbook figure.

Highlight images from: Workshop I and Workshop II